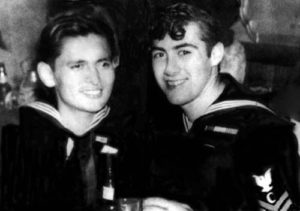 Angelo was born to Maria and Giuseppe DeFino on Mulberry Street (Little Italy) New York City, Nov. 20, 1926. At the age of four his family moved to Jersey City, N.J. He was the oldest of six children. At an early age Angelo helped his father delivering ice.
He enlisted into the United States Navy in 1944 at the age of seventeen and was honorably discharged June 1946. His highest rate was S1/c. His duty stations were Sampson Naval Training Station NY, Treasure Island, CA., and USS Hadley (DD774). Wounds received on this ship resulted in being awarded the Purple Heart. After Hadley he also served at Leyte, Philippine Islands and on the USS ATR74. His awards also included the Presidential Unit Citation, Navy Combat Ribbon, Asiatic Pacific Theater Medal, w/ 1 Battle Star, American Theater Medal, and the World War II Victory Medal.
Now out of the Navy he met his bride-to-be, Mary Hopkins. They were married on Sept. 20, 47. This union resulted in three children, all boys, Joseph, Gerald, and William. His boys, all now married, presented him with six grandchildren.

After the Navy he worked for the Erie Railroad and and an ironworks company. He became a truck driver for Bond Bread Co. and remained with that company for twenty-three years as a Teamster. After leaving the bread company he was hired by the U.S. Postal Service. After fifteen years there he retired.

These words were submitted by widow Mary.