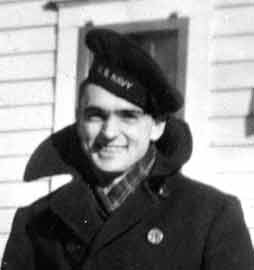 March 25, 1925 in rural Wilber, NE. Graduated from Wilber High School in May, 1942 and from Lincoln School of Commerce in March, 1943. Sworn into the U.S. Navy in June 1943. About the middle of 1944, I was assigned to the USS HUGH W. HADLEY (DD774) in the ship’s complement being assembled at Treasure Island during completion of the ship. The ship left San Diego for Hawaii, ready for duty on February 21, 1945.

On May 11, 1945, the USS HADLEY was on radar picket duty between Okinawa and Japan. During a battle lasting a little over 1 1/2 hours, 23 enemy planes were destroyed, including 3 suicide bits. My battle station was on the bridge, relaying the Captain’s commands by phone. The order was given to abandon ship, and a damage control party of about 50 men were making a last effort to put out the fires, control the flooding and list, and save the ship, which they did. Those of us who abandoned ship who were not wounded returned aboard the HADLEY from the support ships to help with the jettisoning of ammunition. In a floating dry dock in Okinawa our holes were patched and the ship braced and made stronger. On July 26, we began a 2 month, 6800 mile voyage to Hunters Point Ship Yard in San Francisco, traveling at about 5 miles per hour at the end of a tow line. The war ended during this trip and so it was decided the ship would be decommissioned and scrapped.

After the HADLEY was decommissioned, I was assigned duties at the Personnel Separation Center on Terminal Island, discharging those who became eligible. When my turn arrived in early 1946, 1 continued at the Separation Center on an open-end extension. An offer of a car ride to Nebraska during the railroad strike prompted me to take my discharge. That fall I enrolled in the University of Nebraska and was graduated with a Bachelor of Science Degree in Business Administration in January of 1950.

In January, 1948, while still a student at the University, I became a part time employee of The Midwest Life Insurance Co., working in the Mail and Supply Department, and as a trainee in the Underwriting, Issue and Administration of Health Insurance. I continued as a full-time employee after graduation, even getting my indoctrination in sales, qualifying for a leading producer’s club trip to New Orleans. Not making the desired monetary progress, after the New Orleans trip, l returned to full-time administrative duties in the home office. In 1953 I became a partner in a Standard Service Station, later a sole owner, and for about a year, an owner-operator. I then sublet the station until its sale in 1956.

During another eventful May, my ship was sunk again on May 23, 1948, Betty and I were married. Betty had received her degree in Pharmacy in 1945, and was working as a registered pharmacist. She also received her PHT–Putting Hubby Through. We were blessed with Thomas (April 1949), Richard (February 1952) and Harold (August 1953). With the addition of the daughters-in-law and 3 grandchildren, there is a great bunch of buoyant bodies, so there is not much chance of my ship again nearly sinking.

To continue with my insurance career, I joined Woodsmen Accident and Life Insurance Company in June, 1955, as a Claims Auditor, and was engaged in the Group Department operations from 1958 until my retirement in August, 1988. During retirement we have had more time for travel, golf, fishing, and friends. We have traveled by car through all the states and provinces except the Northwest Territories and Newfoundland. We did fly to Hawaii and Mexico City. We are looking forward to continuing our travels.

Note from Webmaster: Al was called away for his last voyage on May 30, 2005. He had been one of our biggest supporters, having attended 15 of our 16 reunions, this includes the last one only two weeks before his death.