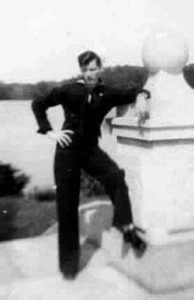 May 11, 1945 changed our lives, and my life started again when I was discovered in the powder room of Mount 1, the forward 5″ gun mount. My leg was fractured, knee was gashed, and my head cut over the left eye. I spent the next six months in hospitals and was finally restored to duty in January of 1946. I was then sent to Newport News to load the USS Leyte. It was being readied for commission. When this task was completed I was assigned to ship’s company at Newport News and served as a Storekeeper. During this time the base was being decommissioned. At that time my point accumulation made me eligible for discharge. This happened in June of 1946 and I returned to the home of my parents in New York.
My dad was involved in defense work and like me was laid off. When my 52/20 became 6/20 I went to work for a small transformer company as an assemblyman. I started high school in the evening to complete the necessary years require and entered Fordham University. Taking advantage of the G.I. Bill. I graduated in June 1953 with a Teaching major, which I never used. I was then employed by a Relay manufacturer in Long Island City. There I met my future wife.

In April of 1953 I married my wife Anita and at the same time became Factory Manager of a Transformer company, a division of W.L. Maxson. The end of the Korean conflict resulted in downsizing and I was unemployed for several months. Kollsman Instrument Corp. then employed me for fifteen years in various capacities, from Program manager to Manager of Special Projects. I left them prior to their move to New Hampshire and was employed by ComTech Lads on Long Island for about a year and finally by General Instrument Corp. for seventeen years. In June 1990 I took early retirement and about a year later my wife joined me and we moved to a home we had built in Pennsylvania for that purpose.

In addition to all of the above our family life was also an active one. We are blessed with nine children. Our first born, Brian, passed away at fifteen months. The following began arriving soon after, Kenneth, Stephen, Maureen, Patricia Anne, Michael, Donna, Christopher Neal, and Philip. Patty was the first married and the count for grandchildren is sixteen. They are in age order Olga, Christina, Yianni (John), Kathleen, Andrea, Colleen, Kyle, Edward, Nicholas, Briana, Brian, Ryan, Alex Marie, Brenna, Jack, and a step grandson Christopher.

The last several years have been devoted to our attempts to locate our missing shipmates.. Looking forward every two years to the gathering of the crew and to once again renew old and new friendships. I know that it is not necessary to state that a good portion of our lives are spent visiting and imparting words of wisdom to our children and our grandchildren and hoping that somewhere, sometime someone will listen.

My continued wish is that we be given that time to add more of us to each of the pages we have been privileged to share with you.

Anita passed away after fifty plus years of marriage. She died on September 7, 2003 from Pancreatic Cancer. In spite of her condition she was determined to join us at our reunion in San Antonio.

GOD BLESS AND KEEP YOU ALL SAFE FROM HARM.