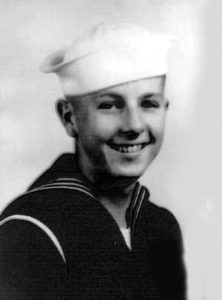 On February 8, 1926 in the small town of Sprague (population’ about 100) in southeastern Nebraska. I was the 7th and last child born to my parents of Dutch/Irish descent. Sprague was, and still is, a farm community located in the southeast corner of a section about 15 miles south of Lincoln. To provide the most accessible location to serve both the town and the farm community, the grade school was located 1 mile east of town and the high school was located 1 mile north of town, I had to walk a mile to and from both schools. The grade school was a 1-room building, heated by a coal burning stove. The school accommodated around 30 kids through 8 grades and all were taught by the same teacher. The high school generally had about 40 students and 4 teachers. There were 10 kids in my class (8 boys and 2 girls).

In addition to family homes, the town had the Methodist Church, post office, hardware store, grocery store, garage (with the old glass-globe gas pumps), beer joint, and barbershop (maintained by the barber in her home). Being a town kid, summer activities included playing baseball, fishing and swimming (skinny dippin’) in a natural spring-fed lake at the edge of town. In the winter, we skated on this same lake, rode our sleds down the town hill, and, of course, had the usual church and school activities. During one summer break in my high school years I worked on a farm. On the following two summers I worked in two different creameries in Lincoln. At one I operated the milk bottler and at the other the bottle washer. This, of course, was during the time when milk was packaged in bottles and delivered door to door. The plus of these jobs was that I got my fill of ice cream and chocolate milk at graduation,

WWII was in full swing. After working the summer, I made myself available to the draft board and asked to be inducted into the Navy. I took my “boots” at Farragut, ID and was sent to Treasure Island for further training and assignment. My gunnery training was on a 20-MM gun.

When I joined the HADLEY, however, my GQ station was on the projectile hoist on #1 5-inch mount. I was on Doug Aitken’s crew as Radar Striker on regular watch. During the famous battle off Okinawa, when the HADLEY was hit by either a suicide plane or a bomb, I was knocked off my feet and hit the projectile hoist with my jaw and broke it (jaw that is). After abandoning ship, I was picked up and sent to Guam, via a hospital ship, along with others who were much worse off than I was.

Eventually I was returned to the US by plane from Guam to Hawaii and by freighter to San Francisco (Goat Island) for re-outfitting. My belongings from the HADLEY never did catch up with me.

After leave, I returned to Treasure Island for reassignment. John Woodcock and I were assigned to the USS A P Breckenridge and we were sent to Saipan to bring troops back. After made only one trip. I was discharged at Shoemaker, CA and took the bus back to Nebraska.

In the fall of 1946, I enrolled in the National Business Institute to take a Business Administration Course. Upon my graduation in 1948, I took a position with Continental Oil Co. (CONOCO) in their Lincoln Div. Accounting Office.

Retirement has been great with golfing, traveling, and especially the HADLEY reunions.