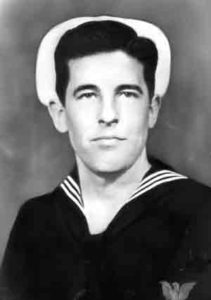 I was born September 20, 1923 in Los Angeles, CA. I was raised in the Willowbrook area and attended several schools in that area. I was the 2nd of 5 children and the 1st to be born in California. My parents and several other members of my family came from Arkansas to California in 1922. My brother, Bill, 2 years older than me, was the only one of my siblings born in Arkansas. He spent 23 years in the Navy as a submariner before retiring. I also had 3 sisters, 2 of whom are deceased. Bill and several of our friends joined the Navy in 1941, but my dad wouldn’t sign for me so I wasn’t able to enlist until September, 1942. Prior to joining the Navy I was employed by Goodyear Tire and Rubber Co.

I attended boot camp in San Diego, CA. I then served aboard USS Clemson, USS Remey and USS Sylvania. In 1943 I married Isabelle Cormany, who was also from the Willowbrook area. We had 3 children, 2 boys and 1 girl. Our daughter, Donna, was born in 1944. Three weeks after her birth I was in San Diego and had a 72 hour leave, which restricted how far I could go from the base. I asked permission to go to L.A. to see my wife and new daughter, as I was going to sea and thought I may not come back, which was denied. I went anyway and overstayed my leave, turning myself in after about 2 weeks. As I had missed my ship I was told they were going to make an example of me. I was given a general court-martial with a dishonorable discharge and sentenced to 15 years at Terminal Island Prison. After several months there a chaplain came to talk to me and asked me if I was willing to return to duty if I was released. Of course, I jumped at the chance, having served only 7 months of my sentence. I was then assigned to the USS Hadley in February 1945. I was a MM3c and worked in the aft portside engine room

On May 11, 1945 I was working in the engine room when we were hit by the first kamikaze. I went topside, then started back down the hatch to get a life jacket for John Beeler. Ensign Seitz saw me and pulled me out bodily and told me I’d been down there long enough. Shortly thereafter we were hit by another kamikaze and I was blown off of the ship along with many others. My head, face and arm sustained 3rd degree burns and all of my hair was burned off. I landed in the water a long way from the Hadley. It felt really good when I landed in the water. I finally was able to swim to another ship in the area and climbed aboard, after having been in the water for about 3 hours. I attribute the fact that I spent that time floating in the ocean for not having severe scars from my burns. I was taken to the Base 18 Hospital in Guam. I had also lost most of the hearing in my right ear from the concussion of being blown into the water, but didn’t tell anyone at that time as I wanted to return to duty. After being at the hospital for a several months, I was released and was one of the crew who went with the Hadley under tow to return her to San Francisco. As any of you who were part of that crew will remember, we were caught in a typhoon, in which we thought we would be capsized.

After returning to the states I went aboard the USS Currytuck, which was going to Antarctica. I decided that was the time to tell my C/O about my hearing loss, so I was then sent to the US Naval Hospital in San Diego, CA. It was determined that my hearing loss was severe enough to receive a medical discharge. I received disability compensation of $13.00 per month for that, which was discontinued after about a year with no explanation. I was never able afford the time to go through the process to try to get it restored as, by then I had my wife and 3 children to support. In 1975 I went to a private audiologist who performed surgery to restore my hearing.

I received an honorable discharge on April 10, 1947. I returned to work at Goodyear. My job had been given to someone else in my absence with the promise that I would get it back when I returned. As I didn’t think it would be fair to him to take my job back after so many years I went to work in another department, which I didn’t like, so I eventually quit. Over the next several years I worked at several jobs delivering blueprints, delivering telegrams, worked as a refrigeration apprentice which I really liked, but was let go after my apprenticeship due to lack of funding. I then went to work as a truck driver for Bleeco Sheet Metal in Lynwood, CA. After working there for a number of years we moved to Roseburg, OR where I worked in a sawmill for 3 years. Then we returned to S. CA and was rehired in my same job at Bleeco, until the company declared bankruptcy in 1961. Not long after that they went back into business under a new name, Haller Tool & Dye, and I was hired as a welder and worked there for 3 years. In 1961 my wife and I divorced. In 1963 I married my current wife, Jeanie (Cleveland), who had also been previously married and had 2 small children. In 1965 we moved to Norco, CA and I held a couple of temporary jobs and eventually bought a truck and started hauling mobile homes. I did that until 1972 when we moved to our present residence in Snelling, CA (Merced Co.) to be near my parents. I got a job at a rock plant driving a Euclid bottom dump truck until the company went bankrupt on 1976. I had a couple of trucking jobs after that, then bought a dump truck and worked as a private contractor. After 3 years or so I got a job for Pepsi Cola in Merced as a maintenance worker. I retired in 1985 at the age of 62.

Over the years I’ve enjoyed riding and racing motorcycles with my sons on-off road and working on older cars and trucks. After moving here to Snelling Jeanie and I joined an off road club and have enjoyed driving a sandrail at Pismo Beach and in rally’s in the Nevada desert. We’ve also had a couple of street legal dune buggies and now have a 1979 replica that we drive in parades, poker runs and just driving around with other members of our car club.

Webmaster:
Ernie was awarded the Bronze Star for his rescue efforts in the Fwd. Engine Room on 11 May 45.

Granddaughter, Cynthia Klobuchar, has informed the site that Ernie passed on 21 September 2007.