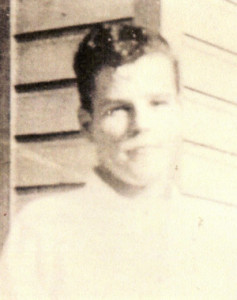 Louis was born in 1923. He grew up in Chicago with 6 brothers and 4 sisters. The depression years were especially hard for a family with 11 children. During the war, Louis and 4 of his brothers joined the armed services. His oldest brother tried to join but was too old at age 38.

When the war ended his youngest brother was still too young at age 16. Louis married Geraldine Nelson on May 13, 1944 and left for Great Lakes Training Center two weeks later. After boot camp and seaman training he joined the Hadley crew. During the battle on 11 May 1945, Veesenmeyer was among the men who kept a 40mm gun firing as a kamikaze crashed into their position. All the men on that gun mount were killed and received a special recognition for “outstanding performance of duty.”