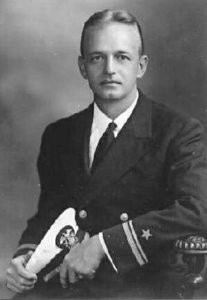 Bill King was born in Hinton, a little town in West Virginia, on Oct.15 1911. His father worked for the C & O Railroad. After grade school, he was sent to Washington DC to live with his Aunt & Uncle so that he could attend Central High School. He was later accepted at Dartmouth College. To defray tuition costs, he waited tables in winter & in summer organized a band, “King’s Jesters”, which was booked as entertainment on idyllic Atlantic cruises. He graduated in 1933, a member of Casque & Gauntlet. He moved to Richmond Virginia where his widowed mother lived. He worked summers as a lifeguard and graduated from the T. C. Williams School of Law at the University of Richmond where he was elected to Omicron Delta Kappa. He joined the Richmond Law firm now known as McGuire, Woods, Battle, & Boothe.
With the Navy’s need for more manpower, older men were being called. Bill was sent to OCS in Princeton NJ and in 1944 was commissioned LTJG. He reported to the USS Hugh W Hadley DD774 as a Damage Control officer. His young family followed him to California. He flew a large kite off the stern of the Hadley as a farewell to his family as the ship steamed out of Coronado Bay to join the Pacific Fleet. Living the unspeakable realities of war, he wrote home of the lighter side. He described sitting in a bucket & being lowered over the side for a rare bath…using only enough water in the shower to wet the skin then “soaping-up” before a final quick rinse (this became a lifetime conservation habit)….watching the sudden silvery swarms of flying fish that catapulted across the decks.

He later described the infamous day, May 11 1945, when, in a single action unequalled in WWII, the brave young gunners of the Hadley shot down 23 Kamikaze planes while simultaneously sustaining 3 direct hits by additional Kamikazes. “With the ship listing sharply to starboard, all its power gone, and heavy fires amidships, we descended three decks to the forward keel and started the emergency fire pumps. The fires raged “among live 40mm shells subjected to intense heat”. His Citation from Admiral Spruance stated that, “By cool and capable direction, he assisted to a great degree in the eventual saving of his ship. His courage, leadership and devotion to duty were an inspiration to all”.

Bill’s hobbies were golf, traveling to places of antiquity, boating and increasingly delving into the history of the Hadley. He ordered a copy of the Ship’s Log which he read religiously and he mapped the course of the Hadley’s Pacific maneuvers. He was married to the former Suzanne Davis, a member of the U.S. Olympic figure skating team of ’33 (now deceased). They had two children, Susan King French (a real estate broker) and William H. King, Jr. who also went to Dartmouth College. He currently serves there as the Chairman of the Board of Trustees. He practices law at his fathers firm and his daughter Suzanna is also a recent graduate of Dartmouth. Bill’s grandson Turner Hunt has his own Computer Co. and his grandson “Bill” (William H Hunt, Jr.) is president of Hunt & Assoc., an assisted living conglomerate. There are four great grandchildren.