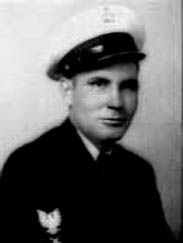 Francis Charles Clouse was born Nov. 20, 1920, on the family farm in rural Foxholm, ND to William and Julia Clouse. He was 10th of 13 children.

Francis finished two years of high school and after his seventeenth birthday, he enlisted into the regular Navy, Dec. 1937. He had his recruit training at Great Lakes Naval Training Center. From there he was assigned to USS Idaho BB42, a Battleship of the line, and served on it for four years. The ship was on station at Hvalfjordur, Iceland when the Japanese attacked Pearl Harbor. Two days later the ship was reassigned to the Pacific Fleet via Norfolk Naval Station. At Norfolk Francis was reassigned to a shore job where he worked as an instructor. After that his next sea assignment was to the USS Chiwawa AO68, a Fleet Oiler. Francis achieved the rate of Chief Gunners Mate in May 1944. He served on that ship for two years and was sent to Washington D.C. to attend Advanced Gunner’s Mate School.

After school he was assigned to the USS Hugh W. Hadley DD774. This was then Dec. 1944. On April 1945, USS Hadley took part in the invasion of Okinawa, covering the initial landings. On 11 May 1945 Dutch, as he was known to his ship mates, was killed In action on the aft Gun Deck when Hadley was struck by the second Kamikaze to hit the ship.

“When the USS Hadley was seriously damaged during heavy Japanese air attack off Okinawa, Clouse took a hose and rushed to the section of the ship set afire by the hit. Although in danger from exploding ammunition and extensive fires, he kept the blaze under control until he was mortally wounded by the crash of an enemy suicide plane near his station.”

This story was compiled and sent to me by those two indomitable ladies, his sisters, Catherine Kostenko & Helen Clouse. May 2003.