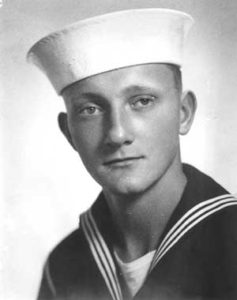 George was aboard Hadley during all the operations at Okinawa. He left the ship on or about July 1, 1945 with the first draft of people were sent back to the states. He was discharged from the Navy in 1946.

George attended University of Southern California and graduated in 1952.

His work assignments included constructing a cement block plant at Palmdale, Cal. This was continues work from 1953 until 1957.

Entering into sales he sold pre-stressed concrete products. Sold Epoxy products. Entering into electronics he sold circuit board connectors. He even invented a unique connector for use on the Polaris Missile.

Changing into the yacht repair business, continuing in this line for twenty-five years.

He is married to a lovely lady, named Lee. They have two wonderful daughters Diane and Donna.