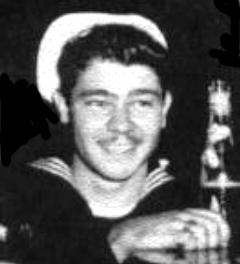 I was born and lived in Washington, DC, until entering service in 1943. After boot camp at Bainbridge, MD, and service school at great lakes, assigned to USS Acree DE167, as S2/C GM/Striker, left the states in September 1943 and went through the Panama Canal and into the south pacific. I participated in Saipan and Hollandia and received battle stars for both. In July, 1943, was sent back to the states for new construction. After a 30 -day leave, reported to Treasure Island in California for new assignment. I was assigned to the Hugh W. Hadley DD774.
I was discharged from service 2/46 and married 2/24/46. My wife, Lillian, worked at BuShips, Navy Department, during WWII while attending GWU and American U.

After marriage, we moved to Harrisburg, PA, where I worked for an uncle in a plumbing supply business. Our daughter, Allison, was born in Harrisburg 7/19/47.

Moved back to DC in late 1948 and started work at the then Naval Ordnance Laboratory 4/49. Attended GWU and worked as a technician on the atom bomb testing at the lab and in the field at Mercury, NV, and at Eniwetok until test ban between US and Russia. Thereafter, I was assigned to the lab’s battery research and development section until retiring in 1979.

Lillian, on returning to work in Washington, worked at the Displaced Persons Commission, and then went into banking. She retired in 1980 as vice president and manager, 7th and H Streets office (Chinatown), Riggs National Bank of Washington.

In the interim, we had moved to Maryland in 1950, but we have lived in Florida since retirement. Our daughter married Bart Brown in 1970 and they have one daughter, Kristen, who is presently attending college and is engaged to be married.

We keep active as volunteers in community affairs such as environmental organizations (primarily the Lemon Bay Conservancy where we each served at Treasurer for three year periods), 14 years of AARP tax work, and serving at the polls, Charles as deputy clerk until retiring, and Lillian as clerk, etc.

Charlie was Gun Captain of one of Hadley’s two twin 49MM Gun Mounts.
Webmaster’s note: Charlie passed away June 23, 02. a victim of Alzheimer’s.