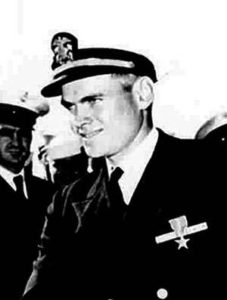 Hunter Savidge Robbins was born in Grand Haven, Michigan, which deprived him of being a fourth generation Californian. However, his family and he soon returned to California where he attended Polytechnic Grammar School and Catalina Boys’ School before entering the University of California at Berkeley in 1938. He majored in English Literature. While at Berkeley he was active in baseball and soccer, and was Senior Manager of the baseball team, traveling with them on a barnstorming tour of the Mid West. He was a member of Psi U Fraternity and campus organizations such as Skull and Keys, Ball and Chain, and Big “C” Society.

Because of the attack on Pearl Harbor on 7 December 1941, his Naval Reserve Officer Training Corps class at Berkeley was graduated early. Ensign Robbins soon reported aboard the destroyer USS Anderson which was in the South Pacific. The Anderson was severely damaged by enemy gunfire, and Hunter was awarded the Bronze Star Medal for his great efforts in preserving the ship.

Hunter was returned to the US to assist in forming the crew and assembling communications equipment for the USS Hugh W. Hadley (DD774), which was being built at the Bethlehem Steel Building Yards at San Pedro, CA. LT Robbins was on board as Communications Officer for the ship’s commissioning on 25 November 1944. Hadley was soon to be a record setting ship, shooting down more enemy aircraft than any other ship in the Navy in a single engagement; at the same time she was hit by three of the Kamikazes and a 500 lb bomb. For his efforts and assistance in saving the ship, Hunter Robbins was awarded his second Bronze Star Medal. The ship and all the crew were awarded the Presidential Unit Citation. Hunter became the Executive Officer of Hadley prior to her decommissioning on 15 December 1945 at Hunters Point Naval Shipyard in San Francisco.

LCDR Hunter Robbins and his fiancée, Barbara Woglum, were married shortly after he left the Navy in 1946, and he started working as a sports writer for the Berkeley Gazette. In 1949 he joined the Industrial and Commercial Division of Coldwell Banker Realty in San Francisco. He formed his own Real Estate Firm, Robbins Realty, in 1956 and remained there until his retirement. In 1968 he was named East Bay Realtor of the Year’.

In retirement he turned his energies and enthusiasm toward his University. He served a short time on the Alumni Board of Directors and then turned to fund raising. He led his class of 1942 in a successful 50th anniversary fund-raising, raising over $650,000 for an endowed chair, a room in the new health services building and library, and undergraduate scholarships.

In 1993 he was honored as one of only twenty-three persons who held season tickets to the Oakland A’s games every year since the team’s arrival on the West Coast.

In February 1984 Hunter was honored with the UC Berkeley Foundations Trustee Citation. He had worked on every five-year class reunion and was Chairman of the 50th.

Until his illness, Hunter Robbins was active in sports, playing tennis regularly, as well as golf and bowling. Hunter’s enthusiasm and sense of humor, which were ever present and genuine, enabled him to accomplish more than most.