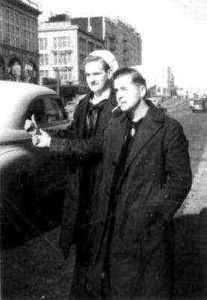 Following my commission on the USS Hadley I was assigned to the USS Hollester DD788 detail in December 1945. We put her into commission in Seattle, Harbor Island. We left Seattle at the end of March 1946 for San Diego for her shakedown. I had accumulated enough points for discharge by May and was discharged on May 23 in St. Louis.

I returned to the Kansas City, Missouri area where I was born and raised. I spent several months there in the 52/20 club. After a couple of jobs I accepted a position with the Standard Oil Co. at their refinery in the Kansas City area. This was then September of 1947.

I married Velma Sterling in May of 1950. We had two sons, Mike (1951) and Dennis (1953). We left the Kansas city area in 1958. The move was to Centralia, Washington, this is 80 miles south of Seattle. I worked sixteen years at a distribution center for Richfield Oil products.

During this time Velma and I had two more sons, Ken (1959) and Don (1963). I left the old products business for good in 1974 when I accepted a position with the City of Centralia Street Department. I worked there for fifteen years, the last five serving as the City’s Street Superintendent.

I retired in March 1989 and have since been able to spend a good deal of time doing my favorite activity, gardening. Velma retired in 1996. We enjoy traveling though out the Pacific Northwest, when time allows. We would like to spend more time traveling thought the United States.

I also thoroughly enjoy many sports, although I am not as active of a participant in them as I once was. Baseball is my first love. In my early years in Centralia I had the opportunity to coach Little League, and also played on a local softball team. Velma and I enjoyed many years participating in local bowling leagues.

Velma and I have really enjoyed our four sons. Mike has his BA degree in History from the University of Washington, spends a good deal of his time acting in local theater and is working for Circuit City in the Centralia area. Dennis is happily married, works in developing sales for a linen company, and live in Washington State. Don is a civil engineer and works as a project manager for a medium sized company in Seattle. Ken is now an Elementary School Principal in Phoenix, AZ.

Velma and I now have eight grandchildren and three great-grandchild.

This is from your Webmaster.

This is story that Leo will not tell you. His General Quarters Station was on Mt. 44 until just a few days before our 11 May event. He was reassigned to 1 5″38 Gun Mt. All hands on MT 44 were killed.