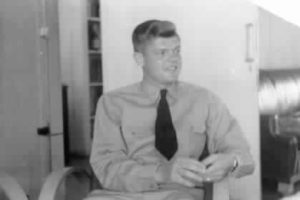 Patrick Henry McGann, 78, a retired Navy captain who, as a World War II destroyer gunnery officer, received the Navy Cross, the Navy’s highest award for valor after the Medal of Honor, died of cancer May 16 at the Hospice of Northern Virginia. Capt. McGann, an Ohio native, graduated from the U.S. Naval Academy at Annapolis with the Class of 1943.

Aboard destroyers in World War II, Capt. McCann participated in operations that landed Marines in Guadalcanal and Tulagi. He fought in the bloody battle of Savo Island in the Solomons where his ship traded shells with a Japanese battleship. He also participated in the invasions of Tarawa and Kwajalein and received a Purple Heart becoming gunnery officer of the destroyer Hugh W. Hadley. That ship was serving on picket duty off Okinawa when it was swarmed by an estimated 150 kamikaze aircraft, of which the Hadley shot down 23. The Hadley survived heavy damage, including three kamikaze hits, made it back to the mainland. Among the results of the action was a Navy Cross for Capt. McGann and a Presidential Unit Citation for the ship.

After the war, Capt. McGann held a variety of seagoing and staff posts. He served as gunnery officer of the heavy cruiser Newport News, commanded destroyers and also a destroyer division that was deployed to support U.S. Forces in Vietnam. He served in the Mediterranean on the staff of the commander of the 6th Fleet and with the Defense Intelligence Agency. His last assignment was in Washington with the Defense Supply Agency.

After retiring from active duty in 1972, he worked as a consultant on antisubmarine warfare for such companies in the Washington area as Wheeler Industries and George W, Sharp & Co. He retired from Sharp about a year ago. In addition to the Naval Academy, Capt. McGann was a graduate of the Naval War College and received bachelor’s and master’s degrees in metallurgical engineering from what was then the Carnegie Institute of Technology in Pittsburgh.

He had maintained a home in McLean since 1965. He was a member of McLean’s St. John Catholic Church.

Capt. McGann was a past national commander of the Legion of Valor of the United States, a veterans organization whose members hold the Medal of Honor, the Navy Cross, the Air Force Cross or the Army’s Distinguished Service Cross.

Survivors include his wife of 52 years, Jeannette J., and a son, retired Marine Corps Major Patrick H, McGann Jr., both of McLean and a daughter, Carol M. Jones of Manassas, two brothers a sister and six grandchildren.