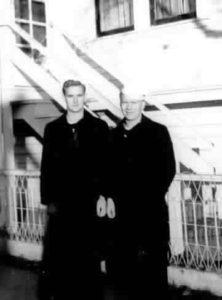 By Nicole Hamilton
The Cincinnati Enquirer

Ralph D-J Fuhr read at least five newspapers every day. And when he was editor and publisher of the Williamsburg Times, he made sure his five children made the front page on the day they were born.

“He loved newspapers – he was a newspaper man,” said his daughter, Kristina Dudley of Gahanna, Ohio.

He was a crewmember of the USS Hugh W. Hadley when the destroyer was hit by kamikazes during the Okinawa campaign. The ship’s crew received a presidential unit citation for downing 23 enemy aircraft.

Mr. Fuhr earned a bachelor’s degree in journalism from Ohio State University in 1949.

After graduating, Mr. Fuhr started working as editor and publisher of the newspaper owned by his father, the Williamsburg Times. Mr. Fuhr sold the Times in 1962 and became an associate editor of the Bethel Journal. He also worked for the Clermont Courier in Batavia.

Mr. Fuhr was a Williamsburg council member for six years. He also served as a lieutenant in the Williamsburg Township Volunteer Fire Department.

In 1969, Mr. Fuhr and his family moved to Gahanna, near Columbus, when he was named public affairs officer for the Ohio Civil Defense Program. Eventually, he became fiscal officer of the organization, which became the Ohio Adjutant General’s Department. He retired in 1990.

Mr. Fuhr was former commander of Post 288 of the American Legion and was retired from the Ohio Naval Militia. He also was a license plate collector – he had every family license plate since 1910.

Mr. Fuhr was preceded in death by his wife of 46 years, Jean Fuhr; and a daughter, Karen Fuhr.

Besides his daughter, Kristina, survivors include two other daughters, Becky Coolbroth of Naperville, Ill., and Mary Moss of Gahanna; a son, Ralph III of Strongsville, Ohio; a sister, Eleanor Hauss of Fort Myers, Fla.; and nine grandchildren.

The body was cremated.

This article submitted by Ralph, son of Ralph Fuhr.