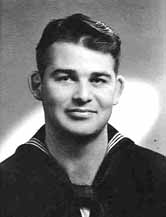 He lived in the Seattle area as a young boy, later moving to Sumner, Wash. to live with his grandmother and to attend high school. He was good student there and star football player graduating in 1938. After high school he worked various construction projects locally, in Alaska, and in California.

He enlisted in the Navy November 30, 1942 in Seattle, Wash. His first assignment was at the Naval Hospital, Puget Sound Naval Shipyard. He was later transferred to the Manchester Fire Fighting Training Center at Manchester, Wash. as an instructor in shipboard fire fighting.

He went aboard the Hadley soon after it’s commissioning and served aboard until the Hadley was severely damaged and towed back to the United States, after it’s heroic service in the Pacific.

Harry was injured in the attack, but was treated aboard the ship and remained with the ship until it until it once again reached the United States.

He was discharged in November, 1945 and returned to Silverdale, Wash. to his wife, new born son, and two stepchildren. In 1948 another son was born.

Harry spent a few years as a carpenter and then became a fire fighter at the Bangor Ammunition Depot, now the Bangor Nuclear Submarine Base. He moved on to Puget Sound Naval Shipyard, where he retired as a Captain in 1976.

Harry passed away on October 9 in Bremerton, Washington. He is survived by long-term companion Bertha Napoleon and his children, three of whom live in the Bremerton area, and one in Alaska. He is also survived by his nine grandchildren and numerous great-grandchildren.