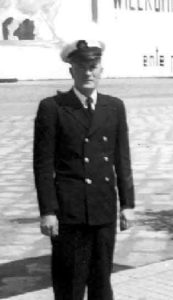 First duty was aboard the four stacker, USS Cowell (DD167) on neutrality patrol out of Key West, Florida. When the ship was transferred to Britain I was then assigned to the cruiser USS Trenton (CL11), then to the USS Sabin (AO25) at Philadelphia Navy Yard which was transferred to the Base Force, US Pacific Fleet, Pearl Harbor, T.H. on normal duties. While on operations, Sabine was struck by the destroyer USS Shaw (Shaw proceeded to Pearl for dry-docking where she was severely damaged 7 Dec. 1941).

We returned to the States for dry-docking where we were on 7 Dec. Upon receipt of orders we returned to Pearl Harbor and joined in the early raids and battles of WWII in the So. Pacific, Solomon Islands, So. West Pacific, etc.

In 1943 was transferred to Advanced Fire Control School Washington DC and then on completion to the commissioning of the USS Meredith (DD726). After shakedown the ship proceeded to England and hence to Normandy on D-day, 6 June 1944, escorted troops to the Utah beach, then to shore bombardment and screening until 8 June when the ship received severe damage from an explosion that disabled her.

The Meredith sank on 9 June 1944. Return trip to the States was on the Queen Elizabeth, then to FC School and on to the Hadley.

Served on varies ships until 1961, was transferred to shore duty at COMOPTEVFOR, Norfolk, Virginia until 1 April 1963-Retired CFC.

Married in 1945 and 1957 divorced. This union produced one son, Bruce. Through him I have three grandchildren, Mathew, Andrew, Diane, and one great-grandson on the way, as of this writing.

Other ships served on but not listed were:

Webmaster: Last evening I received a phone call from Charlie’s son Bruce. Charlie has passed away that morning, 19 February 2007.