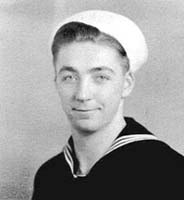 I, Calvin Borror, was born on a farm in Anderson County, Ks on June 11, 1925. I went to a rural grade school for the first eight grades. From there I went to Westphalia Rural High School where I graduated in May of 1942. It is only fair to say there were no school busses in those days so I rode with a neighbor girl my first two years of high school and the last two years I drove a 1931 Model A Ford. Lots of memories of mud and snow packed roads during those two years.
Of course, in 1941 the war broke out so after I graduated from High School I decided to join the Navy after that summer’s farm work was done.

I signed up and arrived at Great Lakes Naval Training Station Thanksgiving Day 1942. I spent nine weeks in boot camp and was able to go home on a nine-day leave. When I arrived back at the base I found that I had been assigned to Machinist school at Great Lakes.

After completing the course there I was sent to Boston for assignment. I was soon assigned to the Newport Torpedo Testing range; there I did some office work because I could type. I was unhappy at that so I was assigned to a steam powered tug, which I enjoyed but I told the Commander of the base I wanted a new destroyer. He assigned me to a diesel driven diving tender to retrieve torpedoes that sank when tested. That was great duty but not what I wanted. I kept repeating my request. One day at inspection be asked if I still wanted a new destroyer, I said,” yes” and he said, “you have it”. That is how I came to be part of the Hadley crew and from there we all know the rest of the story.

After I was discharged from the Navy, April 1946 I spent a semester at college, spent a summer following the harvest, worked on a pipeline and decided to go into farming on the family farm. In 1949 I took over the home farm and with help from a good banker and a friend I stayed on the farm until 1957.

I found a beautiful girl named BARBARA who I asked to marry me and she said YES so on December 7, 1952 we were married. I gave up farming in 1957 and took a Postmaster position in Westphalia, Kansas, which was sure money instead of a guessing game. To our marriage were born 4 girls, Mary, Susan, Linda, and Donna, as well as a boy, David. In June of 1968 I gave up my Postmaster position and transferred into the Wichita, KS Post Office as a clerk and stayed there until my retirement in December 31, 1989.

Since that time we have done some overseas traveling, taken a few cruises, attended a few ship reunions and traveled the U.S. by car.