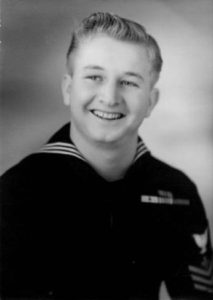 Was born in Kountze, Hardin County, Texas on August 17, 1924. A fifth generation Texan, his great, great grandfather received a Texas land grant from the Mexican government in the early 1820’s. His family moved to Houston when he was one, and he remained there until his death on October 28, 1967. Jack attended Houston public schools, played on the hockey team at Milby High School and graduated with honors in 1942. After graduation, he was an exploration crewman for Gulf Oil on the bayous of Louisiana before he enlisted in the Navy. Jack attended boot camp in San Diego and medical training in Oakland, California. His training as a marine battlefield corpsman at Camp Lejeune, NC, would later be invaluable in his service on the USS Hadley. Jack reported for duty as a pharmacist mate, second class on the destroyer USS HUGH W. HADLEY DD774 at San Diego before the ship was commissioned on 25 Nov 1944. On the morning of May 11, 1945, the USS Hadley, the USS Evans and supporting small craft were on radar picket duty between Japan and Okinawa. Their duty was to report the range, altitude and direction of Japanese aircraft intent upon destroying the US invasion fleet on the shores of Okinawa. They were attacked by hordes of suicide plans or “kamikazes” at about 0800. The Evans was hit and put out of action about 0900 and the Hadley was hit by four kamikazes during the ninety minute battle. One, a twin engine “Betty” bomber (about the size of our Martin Marauder B-26) hit the ship at the water line and penetrated the hull into the engine room, where the boilers were located. As Pharmacist Mate, Jack’s duty was attending to those wounded in the attacks. He assembled as many of the wounded as he could on the fantail, and got them into the water when the order to abandon ship was given. In the water, he then fastened the men to a line to keep them from drifting apart, and for a couple hours took care of them as best he could. When the rescue boat finally reached his wounded men, he helped them to the ladder and tied a line to the ones who had to be hoisted to the deck of the rescue boat. After seeing the last wounded man up, he was so exhausted he, too, had to be hoisted on board. Sometime after, the Hadley as beached on Ie Shima, a small island nearby. The ship was temporarily patched and pumped out. Then came the worst experience of Jack McKim’s life. He had bunked with the men who worked in the engine room and knew them very well. After the room was pumped out to about two feet deep, it was Jack’s duty to lead a detail in and recover the bodies of his shipmates. He also recovered the body of one of the Japanese air crew of the “Betty”. Only once did he describe the experience to me, and he said it was the most traumatic thing he ever had to do. Jack was with the Hadley during the tow-back to the States, including the time of a terrible typhoon. He said his proudest moment was coming into Pearl Harbor under tow and having the carrier USS Franklin dip its flag to the “little” Hadley with twenty-five Jap flags painted below the flying bridge. After the Hadley was decommissioned, .Jack was sent back to Hitchcock Naval Air Station near Houston for discharge . He signed on as a Navy Reservist after the war but chose submarines. When I questioned his choice, he said, “I don’t want to be where the bastards can see me.” Jack attended the University of Houston under the GI Bill, obtained an engineering degree, and worked as an expeditor for a Houston home building firm. He married Clara Joe Wiggins, and had one daughter, Tessa Elaine, in 1953. When the Korean War started, he was called to active duty at the Electric Boat Works at Groton Training Station in Connecticut, where WWII subs were being de-mothballed and running through shakedowns. After that war, he returned to Houston and worked several years on building projects as a structural engineer and was employed as a civil engineer for a major pipeline company where he worked for the remainder of his life. Jack died suddenly of a heart attack on October 28, 1967, at the age of 43. His wife, Clara Joe, lives in Flatonia, Texas, and his daughter, Tessa, lives in San Miguel de Allende, Mexico. Jack was an avid hunter and fisherman. He considered a weekend lost if it didn’t include one or the other, and he was very good at both. He also had a wonderful sense of humor. Being an Air Corps pilot, I had written to him that I wouldn’t like to be on the water out of sight of land “because I can’t swim very far”. He wrote back, “I can’t fly at all.”

Editor’s Note: This story is as told to his brother Charles. Even though some of the facts disagree with our history it is all as Charles remembers it to be. Picture of the brothers was taken in 1943. Charles was then an Air Cadet, subsequently he graduated as a 2nd Lieutenant, Pilot. He then flew hard missions in the CBI Theater on B25s and C46s.