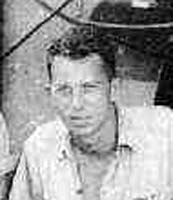 George Edwin Cook, Jr.I was born in Dallas, Texas, on December 6, 1920, to George Cook,Sr., and Commie Irene Foster Cook. After graduating from Irving High School in Irving, Texas, in 1938, 1 attended North Texas State University on a track scholarship from 1939 to 1941.On May 9, 1942, 1 married Eunice Mae Dean and joined the Navy later that year. On August 3 I was sent to Naval Air Station in Grand Prairie, Texas, for boot camp, after which I was assigned to station personnel as a flight schedule maker. In the spring of 1944, 1 was sent to San Diego for further training. From there I traveled by train to Treasure Island at San Francisco where Ralph Fuhr and I were put on a destroyer and sent to radar school on San Clemente Island.
After completing the school, we were picked up by the same destroyer and returned to Treasure Island for assignment to the Hugh W. Hadley DD774.The crew boarded the Hadley at San Pedro and spent several weeks in shakedown before commissioning on November 25, 1944. The Hadley then left to join the Pacific Fleet. After the Kamikaze attack on May 11, 1945, 1 was one of the many that abandoned ship after the order came. Since the watch I was wearing on that day was not waterproof, the hands stopped at 9:32 A.M. as I went in the water. I was part of the crew that brought the crippled Hadley back to San Francisco in 62 days and nights. I was discharged back to civilian life on October 26, 1945. 1 went to work in the retail furniture business. God blessed me with a son, Dean, on September 8, 1949, a daughter, Nancy, on June 23, 1952, and another daughter, Sharon, on September 29, 1953. After 35 years of marriage, my wife Eunice, passed away during surgery for a heart condition, on October 6, 1977. On March 15, 1981, God blessed me with another wonderful wife, Oma Lee. We have now been married 17 1/2 years. God also blessed me with a younger son, Roy and two younger sisters, Eva Lee and Betty, and I now have 13 grandchildren and 3 great-grandchildren.

” I wouldn’t take anything for my journey now!”