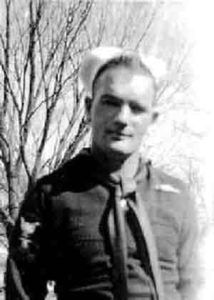 I am Lloyd Duane McKain, born to William. H. and Inez E. McKain, in rural Elk City, Kansas, January 21, 1917 was schooled in rural schools, until my parents moved to Independence , Kansas. I had five brothers, four of them are deceased, as are my parents. I graduated from high School in Independence, Kansas in the year 1936.

I was drafted May 11, 1943 and sent to Farragut, Idaho for basic training. I first served in the Atlantic on board the destroyer Mayo (DD422). I attended Fire Control Schools in Seattle WA. 1943, San Diego, CA. 1944, and in Norfolk VA. in 1944. I was aboard the USS Wyoming for two weeks training cruise.

I received my discharge at Lambert Field in St. Louis MO. and returned to my family on November 24, 1945.

I took an engineering course from ICS, 1946-1948 to earn my degree. I was employed in the Montgomery Co. Engineers office in Kansas from l945-1950. After this I went to work for the Platte Pipeline Co. They were building an oil pipeline from Woodriver, Illinois to Cody, Wyoming.

Platte transferred me to Kansas City, Missouri where I was one of the Oil Movement personnel. We lived in Overland Park, Kansas for fifteen years. In 1967 Platte sent me to Casper, Wyoming. Marathon Oil Co. operated this pipeline.

While there I became a member of Masonic Order, local Lodge #15 and joined the Scottish Rite of Wyoming.

I retired from Marathon Oil in 1978 and moved to Arizona in 1995 after spending summers in Wyoming and winters in Mesa, Arizona.