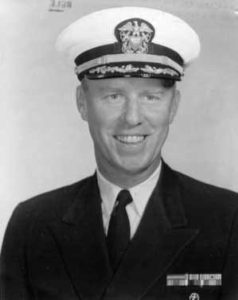 I was sophomore at Columbia college in New York when the war started on 7 Dec. 1941. In April of 1942, I enlisted in the Navy V-12 Officer Training Program for college sophomores and juniors.

The Navy called me to “active duty” as an Apprentice Seaman on the first of July 1943. I was sent to Cornell for one semester and subsequently to the Columbia Midshipman’s School, where I was commissioned in April ’44 as Ensign (DVG). My orders were to torpedo school at Newport, RI. After a brief tad to Norfolk, VA I received orders to report to Hadley’s pre-commissioning detail which I did in mid October 1944.

A brief summary of my active duty career in the Navy follows:

My wife, Marie Therese, and I remained in Hawaii until 1986 when we moved to St. Michaels, MD. Golf and travel are our hobbies. We are convinced that life here is as good as it gets. I have two daughters and two sons by a previous marriage spread from Guam to Hawaii to Florida to England. My shipmates on the Hadley were the absolute best I ever served with. Tested in battle, they performed valiantly and i am proud to have served with them.