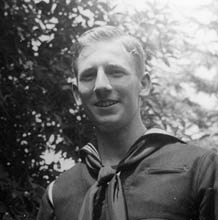 Douglas G. Aitken is a native of Cincinnati, Ohio, but moved to Palo Alto, CA in 1938. He graduated from Palo Alto High School in 1940 and enlisted in the Naval Reserve in September 1942. He graduated from San Jose State University as of 1944 following attendance also at Univ. of California at Los Angeles, and Columbia Univ. NY where he received his Commission as a Line Officer, Ensign USNR, in April 1944. Later, he attended the Navy Post Graduate School at Monterey, CA, and received his MA Degree in Financial Management at The George Washington Univ., Washington D.C.

He transferred to the Navy Supply Corps as a LTJG in 1947 and spent 19 of his next 27 years in Purchasing Management positions at various Navy shore establishments. Included were: On the staff of the Ass’t. Sec. Nav., he represented the Navy on the Armed Services Procurement Regulation Committee in the office of an Ass’t SecDef; as a Deputy Commander of the Navy Ordnance Systems Command, he directed purchasing of surface and underwater weapons for the Navy; and as a Deputy Commander Naval Supply Systems Command, was in charge of the Navy Field Purchase System.

At sea during WWII, he was Radar Officer of the destroyer USS Hugh W. Hadley (DD774) which was hit by three Kamikazes, and shot down more Kamikazes (23) then any other ship in a single engagement. Following the war he served on the USS Argus (PYl4), a patrol yacht; as Supply Officer of the USS Floyds Bay (AVP40), a seaplane tender in Japan and Korean waters during the Korean war; and as Supply Officer USS Ranger (CVA61), an aircraft carrier during the Viet Nam War.

Prior to reassignment from Wash, D.C. in 1970 to Oakland, CA, he was advised he would be called upon for additional duties of a sensitive nature. In 1971 at the direction of CNO, he established and operated an Activity to support the M/S Glomar Explorer, a deep ocean research vessel especially built to recover secretly a lost Soviet submarine in 17,000 ft. deep mid- Pacific waters.

Aitken retired after 31 years active duty in 1974 and, at the request of the Under SecNav, he stayed in a civilian capacity as Director of the Activity which grew to support many other missions during his next ten years. He retired in 1984 and was presented the Navy Civilian Distinguished Service Medal personally by the Under SecNav.