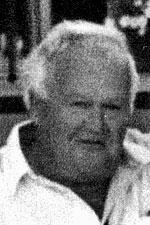 Don was born on November 19, 1926 in Burlington, Washington to Marion L. Hansen and Ruth (Lay) Hansen. He was raised and attended school in Mount Vernon. In June, 1944, at age 17, he enlisted in the United States Navy and served aboard the USS Hadley. He fought in the battle of Okinawa where he was awarded a purple heart. He was honorably discharged in June, 1946.

On March 6, 1948 he married Willa Davenport at the Free Methodist Church in Burlington, WA. They made their home in Mount Vernon where Don owned and operated Hansen’s Shell and Hansen’s Mobil service stations in Mount Vernon for 42 years, retiring in 1987.

In the winter he and his wife Willa enjoyed their time together in Desert Hot Springs, California. Don’s greatest love was his family and spending time with them. He loved life and lived it to the fullest. He brought happiness and laughter to everyone.

Donald, a resident of Mount Vernon, passed away peacefully at his home, surrounded by his loving family on Saturday, October 21, 2006. He was 79 years old.

The following story is from your Webmaster. Most of the troops never tell these real stories. Now that Don is gone I’ll tell it.
Don’s General Quarters Station was in No. 3 5″38 gun mount. After the first Kamikaze hit us all power to the the 5″ mounts was lost, so the crew members were leaving their station. At that time the second Kamikaze hit near by Mt 44. Don was thrown into the water. He was later picked up by one of our rescue craft. This was probably the LSM(R)193. He was awarded a Purple Heart for wounds incurred during that time.