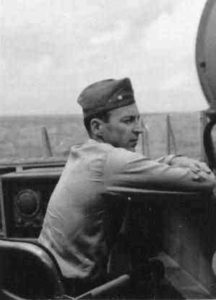 Born in Vallejo, Cal. He was the son of the late Helen Wrenn Brownlie and Robert J. Brownlie. Capt. Brownlie was a graduate of the Naval Academy, Class of 1939. He spent World War II serving aboard destroyers. His naval career included numerous land and sea assignments. His last sea duty was as Commander of the Destroyer Squadron 22 of the Sixth fleet. He retired in 1966 after a tour of duty with the U. S. European Command. His decorations include the Silver Star, two Bronze Stars, and a Presidential Unit Citation.
After his retirement from the Navy he taught math and science in the Norfolk Public Schools, after which, upon retirement from teaching, moved to Accomac on the Eastern Shore of Virginia.

Left to cherish his memory is his beloved wife of 61 years, Charlotte West Brownlie; a daughter, Jean B. Smith and husband, Dr. Thomas G. Smith of Boise, Idaho; three sons, James W. Brownlie of Norfolk, Robert M. Brownlie, Jr. and his wife Jackie of Accomac, Va., and Richard Brownlie and his wife Judy of Orange, TX,; a sister, Arline Baker of Zephyr, NV; five grandchildren and one great grandchild.

Words extracted from his Obituary and copied here for the benefit of his shipmates on the USS Hadley .
Then LCDR Brownlie was the Hadley’s Executive Officer (XO) under three Captains.
His Silver Star was awarded for “For conspicuous gallantry and intrepidity” during the Kamikaze attack 11 May 1945.