Prologue
(Scroll down for story) 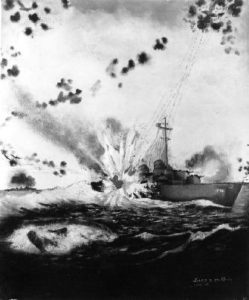 Prologue : Why We Were Fighting for Okinawa

Securing the island of Iwo Jima in the north, in February 1945, the Joint Chiefs of Staff directed the Central Pacific Forces to proceed with the planned Operation Iceberg. The date for the initial landing on Okinawa Island group was March 26, 1945. The Strategic Air Force, then located in Saipan and Tinian in the Marianas, began dispatching round the clock air sorties against major Japanese mainland targets. It was realized that with the establishment of bases on Okinawa air attacks on coastal cities of Japan’s homeland islands could be greatly intensified.

The organized force required to conduct the assault and occupation of the Ryukyu Islands was to be the largest amphibious operation of The War In The Pacific. The 1.213 ships, 564 carrier-based support aircraft, with 451.886 ground troops (combat/support), both Army and Marine divisions, would comprise the “Iceberg” assault force. In addition to the U.S. Task Force was the newly formed British Pacific Fleet, with the Royal Fleet Air Arm., consisting of four fleet carriers and supported by two battleships, with additional vessels from the Royal Australian and New Zealand Navies (a total of 22 ships and 244 aircraft) that would take up their positions in the East China Sea, joining the U.S. Navy Fast Carrier Force (of 82 ships 919 aircraft.) In addition, the 21st Bomber Command of the U.S. Army Strategic Air Force and aircraft from the Far Eastern Air Force would support the invasion force from March 26, through to August 15, 1945.

Capturing Okinawa was the most difficult campaign undertaken by U.S. Forces in The War In The Pacific. The southern defense of Japan was in the hands of the Imperial Japanese naval and air force, concentrated between Kyushu in the north, Formosa in the West, and The Ryukyu Islands in the East. These forces would be a constant threat to any American operations in and around Okinawa and its Island Group. The 32nd Imperial Japanese Army had an estimated 80,000 troops located in well organized cave-tunnel defense positions. The southern part of the island from Yomitan Air Field, south to Mabuni contained the major force of the Japanese 32nd Army.

For the Americans the prospect of landing with a large native population within the combat area, even with the newly formed Military Government and Civil Affairs Teams having responsibility for the civilian control, compounded the difficulty of the operation.

The Japanese Imperial High Command realizing the serious implication if Okinawa were lost, determined to conduct an all-out effort to delay the advance of the Americans as long as possible to allow the build-up of the homeland defense.

The American invasion of the islands of the Kerama Island group, 15 miles westward from Naha City, began the initial phase of The Okinawa War. The rapid amphibious assault by the 77th Army Infantry Division, landing at 0801 hours, March 26, overwhelmed the defense force and secured major islands in 24 hours. The islands provided ample protected anchorages for picket boats, search and antisubmarine patrols, and plane repair facilities.

Five days later an April 1, 1945 at 0830, the major amphibious assault landing on the Highashi beaches of Okinawa was underway. The two Marine Divisions made landings on the left of the Bishi Inlet, with two Army Infantry Divisions coming to the beaches on the right; with the 27th Army Infantry Division as a reserve afloat. The four divisions moved over the Western beaches against unexpectedly light opposition. By noon, Yomitan and Kadena airfields had been secured. By April 6, the two Army Infantry Divisions moving south met the first heavily defended positions of the Imperial Japanese 32nd Army. The first phase of the long drawn out Okinawa War began. 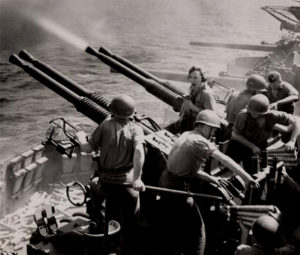 Two long expected moves by the Japanese naval and air units began on April 6. The first was the sudden arrival of the Tokko Tai (Kamikaze) Special Attack Force carrying out continuous air attacks against the U.S. Navy and British Pacific Fleet with a fury never before encountered. The Tokko Tai conducted the most outstanding and spectacular aspect of the Okinawa comparing. The violence of the seemingly endless air assaults on the American and British capital ships and aircraft carriers resulted in 26 ships sunk, and 225 damaged; as the Tokko Tai directed its attacks only against capital ships.

The Imperial Japanese Navy surface ships reacted with the aim of disrupting the landing operations around Okinawa. A small task force from the Kure Naval base in Honshu was dispatched on April 6-7. The Imperial Japanese Navy’s 1st Division Attack Force, comprised of the super-battleship HIMS Yamato, cruiser HIMS Yahagi, and eight destroyers moved into the East China Sea; sailing for Okinawa. At 1240 on April 7, a U.S. Fast Carrier Force launched a coordinated dive-bombing and torpedo attack against them. The HIMS Yahagi was the first to be sunk. Then, after five bomb and ten torpedo hits, the destruction of the HIMS Yamato was brought about at 1423 hours. The remaining force of destroyers, not damaged, slowly returned to Sasebo Naval Base.

On June 20, the Xth U.S. Army took over a thousand prisoners, with the 6th Marine Division reaching the Southwest coast cliffs. The Kiyamu and Hill 81 continued to be strongly held by the last pockets of the 32nd Imperial Japanese Army troops. Lt. Gen. Amamiya, commander of the 24th Imperial Army Division, had urged his men to hold their positions to the end. The soldiers of the division responded to the last man with determination. The 7th Army Infantry Division was smashing through the coral outcropping towards Hill 89, near Mabuni, where Lt. Gen. Ushijima had established his underground headquarters upon arriving from Shuri.

After 89 days of fierce and bitter fighting, the final stages of the campaign brought about an irrevocable collapse of all major Japanese opposition. Lt. Gen. Geiger announced at 1305, on June 21, that The Okinawa War had ended. A formal flag-raising ceremony was conducted at Xth Army headquarters at 1000, June 22.

On May 31, CINCPAC had ordered General Harry Schmidt, USMC, with his three Marine Divisions to report by dispatch to the Commanding General Sixth Army, for purposes of planning for Operation Olympic. The rationale and importance behind the selection of the target area, was the enormous Kagoshima Bay. That bay would become the primary port through which troops, equipment and supplies would pass for the second phase, Coronet. A study of the number of troops and ships that would be required for that operation is as staggering to contemplate today, as it was then, 1945.

Borrowed from; “The Okinawa War”