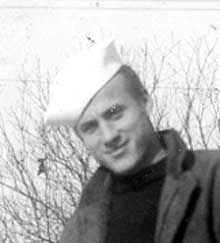 After the decommissioning of the USS Hugh W. Hadley was completed, I went on leave to Platteville WI.

My wife and I were married on January 5th 1946 while I was home on leave. I then returned to California and was assigned to and served on the USS New Jersey for a period of 3 months.

I was discharged as a Electrician’s Mate Second Class at Great Lakes Naval Training Center and returned home to Platteville.

There I worked as a cheese maker for a period of time. Later on worked as a lumber grader-scaler, then a machine parts inspector and finally a telephone lineman.

Upon moving to St Paul, MN I worked in a paper mill as a instrumentation lead man for 37 years.