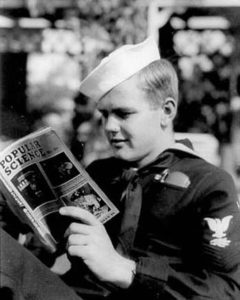 I was chosen to stay aboard the Hadley for the long tow. After assisting in the decommissioning I was discharged in mid December, 1945. Following a short Christmas leave I enrolled in the college at the University of Chicago in January, 1946. I continued there as a student while earning my PhB (College,’47), SB (Physics,’55,) and PhD (Biophysics,’57). In Nov ’58 I joined a group of Pathologists and other investigators at the LSU School of Medicine in New Orleans. We were engaged in a program of research on natural and experimental atherosclerosis. I remained with this group in the Departments of Pathology and Biometry until I retired as Emeritus Professor of Pathology in Jan, 1988.

While at the University of Chicago I married another student, Elsie Gertz in 1950. We have 3 children. Steven, who received his training at LSU, is now a practicing pediatrician here in FL near us. He and his wife Joan have 4 children, ages 25, 22, 17, 15. Karen, who earned her BS in medical technology at LSU, is now living near Birmingham, AL. She and her husband John (an engineer) have 3 children ages 24, 21 and 18. Susan, earned a BS in forestry at LSU and then served 2+ years in the Peace Corp in Ecuador. She earned her MS in Forestry at Mississippi State University. She and her husband Mike, who earned his MS in computer Science, now live near Jackson, MS. They have two beautiful daughters, ages 6 and 7.

In Jan ’89 we moved to Florida to be near Steven and Joan and their 4 wonderful children. We both spend much time enjoying our nine grandchildren. I could go on and on bragging about all of them but will only say that Christopher, age 24 is doing especially well. He is now a 3rd year graduate student in Astronomy and Astrophysics at Harvard. He hopes to get his PhD in a couple of years.

Elsie and I both enjoy traveling, especially to visit our daughters and their families and my sister and brother and their families in Winona, MN near my boyhood home. I am terribly disappointed that we have had to cancel our plans to be with you all in Chicago where we spent so many wonderful years from ’46 to ’58.