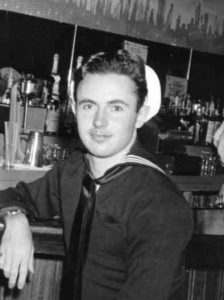 Robert was born on July 13, 1924 in San Francisco, Calif. Both his parents were native-born Californians. His youth and schooling took place in Los Angeles, and this lasted until 1941. At this time his father was transferred to Redding, Calif. (up state). This Interrupted his schooling causing him to still be in school at his draft registration time. He was then locked into being drafted after graduation. Seven days after his graduated from Shasta Union High School he was sworn into the Navy via the draft and became a Class V6S. Boot camp was at Farragut Naval Training Station, Idaho. After that was Class A Fire Control School at Treasure Island, Calif. and then Class B School at the Naval Repair Station San Diego, Calif. With schooling all completed he was then assigned to the Destroyer Pool back at Treasure Island. He then was attached to the crew of the USS Hugh W. Hadley DD774 and then later moved to San Pedro, Calif. to pick up the ship. From then on he shared the same experiences as the rest of the crew.

His General Quarters and watch stations were both in the Main Battery Plotting Room with the group operating the Mark 1 Computer, this was part of the 5″38 Cal Gun System. Th e group was part of the crew that was ordered to Abandon Ship after the second Kamikaze hit. They were in the water for some three to four hours and were later picked up by the accompanying LSM(R)193 and returned to Hadley after it was determined the the ship was not in immediate danger of sinking. On 1 July 1945 he promoted to Fire Controlman 3/c. Bob elected to stay with the ship for the long tow to Hunter’s Point, Calif. This turned out to include being aboard for a potently near deadly Typhoon.

He was still aboard for the Decommissioning Ceremony at Hunters Point and departed right afterward for his official thirty-day oversea leave. This was taken, for the most part, at Los Angeles, Calif. where his parents had returned to live.

Reporting back to Terminal Island Naval Station, Calif. he was assigned to the General Pope AP110 then at anchor in the San Pedro Outer Harbor. This resulted in a trip to and liberty at Yokohama, Japan. This trip was via Seattle, Wash. He was able to see the extensive damage to that city made by the incendiary bombs dropped in Fleet Carrier raids and the B29’s. His Discharge took place on March 30, 1946 at Terminal Island, San Pedro, CA. This was just a few blocks from where Hadley was built and Commissioned.

After four months of 52/20 his father said get a job or get out, so he started in what was twelve years wasted in low pay jobs in the automotive parts field. In 1947 he joined the Naval Reserve, Class V6. Low and behold in the spring of 1951 he was mobilized. First to San Diego and then to Hunter’s Point as a crewmember of the USS Taylor DDE468, a Fletcher Class destroyer. It was completely re-outfitted with ASROC (anti-submarine rocket) system. His GQ Station was as Director Operator of the Mark 56 FC System. This was part of the new 3″ 50 caliber battery that replaced the 40mm weapons. The ship went through a shake down just like the Hadley. After one year of service he was discharged. He then returned to the same meaningless work but with new resolution to improve. At this time he began to accumulate college credits with one thing in mind, the high-paying aircraft industry.

On July 21, 1958 the Lockheed Aircraft Corp. in Burbank, Calif. hired him. He never left. After three years he was selected for a Management job. His first five years there he was working Navy P2’s, originally called P2V. He was a member of the flight checkout crew. These went out of production in 1963. At with time he became a member of that secret society, the Skunk Works, also known as ADP, Advance Development Projects. From that time until retirement he was connected with the SR71 Blackbird and it’s predecessors. He was by now a member of the design group that also supported the aircraft in the field. All this time he maintained a home in Lancaster, California. The Antelope Valley is the center for much aircraft testing. His duties included supporting the aircraft at it’s two overseas bases, Kadena Air Base on Okinawa and RAF Mildenhall in the UK. In 1987 he retired early to accept the same job as a contract employee and has continued on as a consultant up until 1999. The last few years this entails only one or two workdays a week. This all came to an end October 13, 1999. NASA retired their two aircraft and put them into storage. His time with the Blackbirds had ended, three months short of thirty-seven continuous years. The military and NASA appear to have lost all interest in the bird. Short of a miracle there will never be another flight. The SR71, right now, is still the holder of world records as the fastest and highest flying (air breathing) aircraft and the only vehicle to have MACH 3 cruise capability. All the craft have now been retired to museums.

January 18, 1948 he married Carmella, a nice American-born Italian girl. His Mother was also an American-born Italian. This union still exists today, sixty years later. It has produced two girls, Lisa and Denise and one son, Robert III. These kids have produced two grandsons and two granddaughters and as of now, one great-granddaughter and one great-grandson. After three years at UC Berkeley Stephen accepted a job with institutional money manager. David is a graduate of Harvard University and University of Pennsylvania’s Wharton School of Business and a senior manager at Yahoo Inc. The granddaughters Rachel is a Registered Nurse and Layna is a Licensed Insurance Broker.

Just months after celebrating his sixty-second wedding anniversary with Carmella, Robert passed away on April 8, 2010.

Robert’s full obituary as published by the Antelope Valley Press on April 11th, 2010, can be viewed here.