The Hadley was to be decommissioned on 15 December 1945. “Doug Aitken and Hunter Robbins organized a decommisioning party in San Francisco. They rented a hall, had it decorated, stocked it with beverages, and hired some female entertainers. Over 80 crewmembers attended the party on 25 November 1945. Many men had already been released from the Navy, but returned for the party. The group photo taken that night depicts men who had formed a bond of brotherhood.” (excerpt from Chapter 18 – Kamikaze Destoryer) 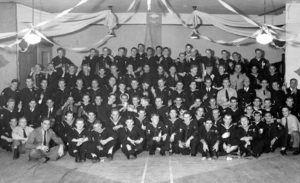 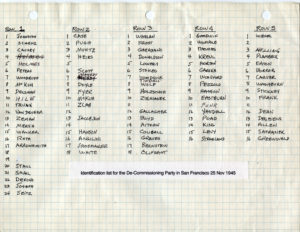 This ID list is pasted to the back of  the decom photo above. It was among the photo archives  saved by Tom English.