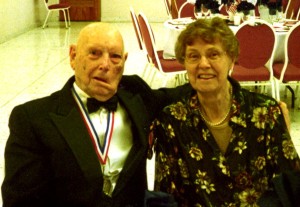 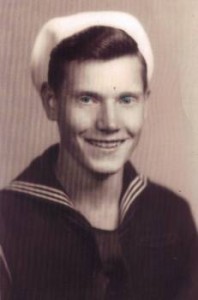 Tom English passed away last week. He was 89. Tom had struggled the past year from the effects of Bell’s Palsy. In his holiday letter, Tom wrote, “This year has not been a good one or even a great one. I have had several trips to the hospital…the only good thing about these visits is that Mary Ann (his lady friend) has been there in all events. Thank you Anita (wife of 50 years) for giving me permission for such a wonderful treasure, Mary Ann.”

I first met Tom English at the 19th Hadley Reunion in San Antonio during May of 2012. His son, Kenny was manning the bar in the Hadley hospitality suite. He pointed me towards his dad. Kenny and Tom are New Yorkers with accents to match. Tom was joking with shipmates and delivering fast one-liners in true New Yorker style. If you missed Tom’s punch line, his own infectious laugh was enough to make you smile. Tom took me under his wing and introduced me to Hadley crewmembers and family…and later he helped me connect with shipmates who couldn’t attend the reunion. His help made writing the book, “Kamikaze Destroyer” possible.  He provided me with mailing lists, photos, documents and fervent encouragement.

Tom was a driving force of the Hadley Reunions. He and Anita scoured phone books nationwide looking for Hadley shipmates. This was before the internet. They would mail letters in hopes that they’d reach another long lost shipmate. Their efforts resulted in 75 shipmates attending the 1995 reunion in San Francisco.

Tom wrote in his Hadley website BIO, “The last several years have been devoted to our attempts to locate our missing shipmates. Looking forward every two years to the gathering of the crew and to once again renew old and new friendships. I know that it is not necessary to state that a good portion of our lives are spent visiting and imparting words of wisdom to our children and our grandchildren and hoping that somewhere, sometime someone will listen. My continued wish is that we be given that time to add more of us to each of the pages we have been privileged to share with you.”

This past year Tom cleaned out 44 years of his Hadley reunion files. He sent them to me. I have the photos, cards, notes and programs that document all of those reunions. I promised Tom that I would create an archive of Hadley Reunion files. An index to the archive will be included on the new Hadley website at www.USSHadley.net.

Tom’s love for his wife and family was equaled by his devotion to Hadley shipmates and their families. Tom will be missed by all who knew him- but he will never be forgotten.