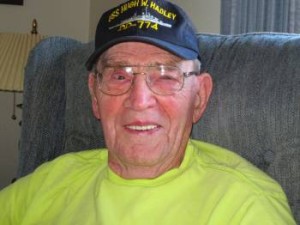 Hadley shipmate Ted Davis S1/c (Signalman) still has vivid memories of 11 May 1945. He was on the bridge of the Hadley that morning. When GQ was sounded Davis was told to go down and help pass 40mm ammo clips. When he reached the main deck he saw a Jap float plane heading straight for the base of the bridge. Ted thought, holy smoke a Jap sea plane! “My brain said run, but my feet said whoa,” Ted remembered. “I didn’t know which way to go and my legs wouldn’t move. I saw a big bomb, puffs from our 5-inch guns, tracers from the forties and heard pings from strafing hitting the ship.”

The plane kept getting bigger. He could see the kamikaze pilot. And then a direct hit from a 5-inch shell turned the plane into a huge fireball. When he stopped shaking and the legs would move again, Ted headed down below. Davis passed a man in a passageway with a bullet in his chest. This was not going to be a good morning for the men of USS Hugh W. Hadley.

Ted Davis grew up on a 155 acre farm in Sugartown, Pennsylvania. His family milked 28 cows and raised wheat, corn and potatoes. He had five sisters and no brothers. At age eleven he went to work at a neighbor’s farm. He drove a pair of mules and milked cows for ten cents a day. When he turned 17 Ted asked his parents if could enlist in the Navy. His mom said no, he had to finish school. His dad said, “you’ve been on your own since age eleven – you can make your own decision.” Ted enlisted in January of 1944. He trained as a signalman and learned Morse Code, Semi-fore, and the Navy Code. He could send 20 words a minute with flags or the signal light.

Davis was below the 40 mm (43 mount) when a bomb exploded directly on the gun. The entire gun crew was killed and Ted remembers being tossed all around the ammo handling room. “Everything broke loose, I hit the overhead,” he recalled. Ted abandoned ship with most of the crew. He was picked up several hours later and sent back to the states for reassignment. But the war ended during his trip back from 30 days survivor leave. 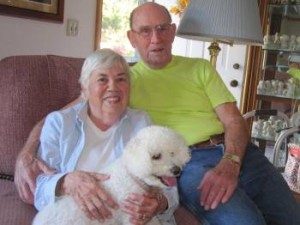 Ted married Clare on New Year’s Day 1952. They raised children of their own and adopted two more boys. Ted built their family home in Erie, Pennsylvania. Jeff and Joy Veesenmeyer visited their home in September 2015. They have a close knit, loving family that now includes grandchildren. When asked what he thought of Navy food, Ted smiled. “I went into the Navy at 157 pounds and came out two years later at 205. I loved fresh hot bread and homemade ice cream. My best friends were the bakers and the guys who made ice cream.”

The Davis’ were on their way to the 12th Hadley Reunion at Mobile Bay in 1997 when a medical emergency forced them to cancel. They regret never having attended any of the reunions. Ted has fond memories and pride of the Hadley and her crew.