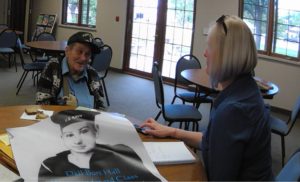 Dell Burt Hall knew Wednesday’s veterans’ coffee at the Aberdeen Area Senior Center in Aberdeen, S.D. would feature a short film about the 1945 South Pacific battle in which he fought. He didn’t know the day would be about him. “It just about put me through the floor,” said Hall, 94, as others were filing out after the meeting.

To honor the World War II veteran, Wednesday was declared Dell Burt Hall Day in Aberdeen and Brown County by Mayor Mike Levsen, and throughout the state by Gov. Dennis Daugaard.

“I knew that something was going on, but I didn’t know it was going to be this,” Hall said. “It’s not about me, it’s about the veterans.”

Hall enlisted in the Navy in 1943, and was on the USS Hugh W. Hadley in May 1945 during a Pacific naval battle that pitted allied ships against Japanese kamikaze fliers. The Hadley shot down 23 planes in 100 minutes, according to the film.

Chuck Pride, a Vietnam veteran from Barnard, made “100 Minutes in Hellfire.”  He also helped provide documentation that led to Hall receiving medals, including the Purple Heart on Veterans Day 2015.

As the credits rolled on Pride’s film, someone turned on the lights, but there was more. Pride had created an additional five minutes specifically about Hall. It was something Hall was not expecting.

Some of the footage brought back bad memories, Hall said. He had a few crumpled-up used tissues in front of him. During the battle, according to Pride’s film, Hall was on the engine crew on the Hadley. As the ship was attacked, he and another man helped save a third mate whose legs had broken. The men did so even though they were injured.

After the battle, according to the film, the decision was made to save the Hadley and tow it back to San Francisco. Hall made the trip back to the U.S. on the ship, which was eventually sold as scrap.

Hall said he was discharged in December 1945, and moved back to Aberdeen in March 1946. He’s lived in town for the last 70 years. He worked for NorthWestern Energy for 35 years.

While people were congratulating and thanking Hall Wednesday, it was apparent he wasn’t comfortable with all the attention.

“I wasn’t alone,” Hall said of the battle. “There was a lot of help there.”