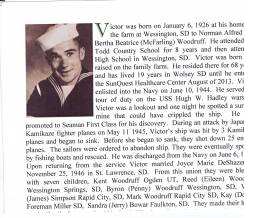 Victor Woodruff passed away in October of 2015. He was 89, married to his second wife Erma, of 22 years. She  sent his obituary and a nice note to notify his Hadley shipmates, family and friends. Erma wrote… “He was always proud of his ship…I have a framed photo of him on the wall from the one year that he was able to attend a reunion. He was unable to attend other reunions but would have liked to.”

Victor grew up in Wessington, South Dakota. He enlisted in the Navy on June 10, 1944. One night on lookout aboard the Hadley, Victor spotted a surface mine that could have crippled the ship. He was promoted to Seaman First Class for his discovery. After service he went home to South Dakota, got married, raised 7 children, cattle and corn. He married Erma in 1994 several years after his first wife died. Between Victor and Erma they had 11 children, 23 grandchildren, and 41 great grandchildren.