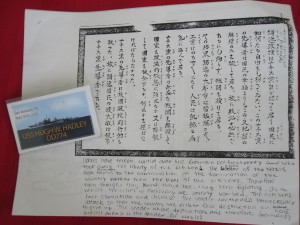 This document was found on the Kamikaze pilot who crashed into the Hadley. The translation printed alongside document is in quotes below.

On 25 May 1945 a work party was sent down into flooded engine room of the Hadley. They were to recover the bodies of five shipmates. It had taken two weeks to patch the hull and pump most of the water out. Now they had the grisly task of finding, identifying and removing their shipmates. Jack McKim, David Aerosmith and Gene Wise were among the men on the detail. They also found the Japanese pilot from the kamikaze plane that crashed through the hull. Wise found some papers – written in Japanese – in the pilot’s flight suit. He hung on to the documents for 50 years. While attending the Hadley Reunion in 1995 he gave these papers to Tom English. Tom’s son knew some Japanese women who could translate them. This is what they found in one document.

“Nazis have taken control over the German political party, who took away the liberty of the citizens. The leader of the Nazis looks forward to the continuation of the domination of the country rather than the lives of the citizens. Therefore, even though they know they’ll lose, they keep fighting. As a result, the cities in Germany are severely bombed. The citizens face starvation and disease. The leader continues unnecessary attacks so that the country will either face destruction or will need to give up. The leader chose destruction and therefore Germany’s biggest enemy is the leader of the Nazis.”

This political anti-war message about Germany was probably how the pilot felt about Japan. He carried this message to his death despite the futility he felt about the war.