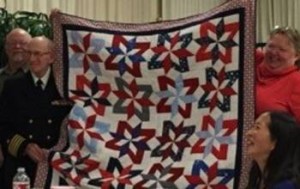 This   “Quilt of Valor” was presented to Doug Aitken at a dinner preceding the regular November monthly  Masonic Meetiing at his Lodge.   It was made by a member of the Amador Valley Quilters #2 of Pleasanton, CA.  The affair was a COMPLETE surprise to him.  At the last minute he was asked to wear his uniform as there would be several Veterans of Foreign Wars there in uniform also in celebration of the approaching Veterans Day.

Just before dinner, his son Doug, daughter-in-law Brigitta, grandaughter Catey,  AND wife Jeanne approached the table. He knew this  had to be important to get his family there – – particularly Jeanne, who is now in a memory care facility.  “She looked great!!” said Doug.

The principal speaker was his best friend at the Lodge.  He talked some about Aitken’s lengthy Navy history  (42 years), and, of course, the big air-sea battles at Okinawa, and the Hadley being towed through a typhoon back to San Francisco.  Doug WAS surprised.  The lady who made the quilt (in red jacket) emphasized at least twice that the quilt was to be USED, NOT hung up someplace, and that it will be repaired as necessary for life!!

On the backside of the quilt there are hundreds of tiny stars embroidered. Looking at it brings back memories of Aitken’s last weeks aboard the Hadley.  “The back of the quilt is covered with several thousand stars – – like the night sky on many quiet moonless nights under tow, that I would see while on watch, or sleeping on deck.”

This was memorable night and a well deserved honor 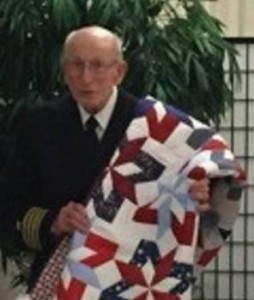