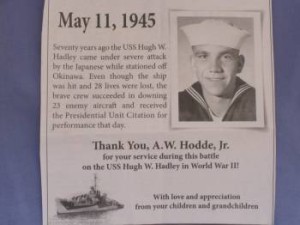 This newspaper tribute was published recently in the Banner-Press, in Brenham, Texas. Hodde’s wife, Virginia submitted the clipping to the Jeff Veesenmeyer, author of Kamikaze Destroyer.  She wrote… “We have your book and all of our kids have read it. They put this notice in our local paper.”

Hodde was the gun captain on the portside 40mm gun. He was one of the more experienced Gunner’s Mates on the Hadley. When gunners from other 40mm mounts had questions or needed advice, they sought help from their shipmate A.W.

A lifelong Washington County resident, he was born in Brenham and attended Brenham public schools. Upon graduation, he immediately entered active duty in the U.S. Navy and served at naval bases in New Orleans, San Diego, La Jolla and San Francisco before being assigned to the USS Hugh W. Hadley.

Upon receiving his discharge from the Navy in 1946, Hodde attended Blinn before transferring to the University of Texas and graduating from Baylor Law School in 1951. He then began practicing law with his father, A.W. Hodde. During this time, he also taught night school for Blinn, primarily teaching veterans attending school via the G.I. Bill.

Now retired from his law practice A.W. Hodde, Jr. and his wife Virginia have continued their commitment to strengthening the local workforce with a $100,000 gift to the A.W. Hodde, Jr., Technical Education Center.

The Hoddes have been married for 60 years and have four children: Gwen Hodde Spiess and husband Donald Spiess; James Hodde and wife Lynette Hodde; Dr. Lefayne A. Hodde; and Robert B. Hodde and wife Stephanie Hodde. They have four grandchildren.