I met Ron MacKay at the LSM/LSMR Association Reunion in Buffalo. My father served on LSMR 411. Ron has authored the book “The U.S. Navy’s Interim LSMRs in WWII”. He shared the following excerpt from his book describing the scene on 11 May 1945 after the Hadley’s famous battle.

Ensign Paul S. Vaitses, Jr., the Executive Officer aboard LSM(R) 193, vividly recalled the aftermath of the Japanese kamikaze attacks of 11 May 1945 at Radar Picket Station 15 off Okinawa: “Our own crewmen certainly acquitted themselves in heroic fashion that day, too. Fully realizing that at any moment they might be blown to pieces if the Hadley had exploded, they calmly went about their appointed tasks of fighting her fires and rescuing her crew. When called upon to give first aid to the burned and maimed, they never once visibly flinched at the sickening sights. Every member of our crew, without exception, had some part in the rescue and salvage operations, and some of the hitherto most uncooperative crew members rose to the occasion with laudable displays of courage, self-sacrifice, and human understanding.”

MacKay’s book will publish in spring of 2016 through MacFarland and Co. Publishers. 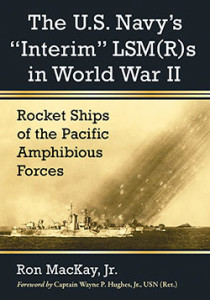