This was the log book entry 70 years ago today aboard the USS Hadley. During the next 90 minutes the Hadley crew would destroy 23 Japanese planes, an all time Navy record for a single engagement. Their scoreboard showing all 25 kills at Okinawa is on display at the Pacific War Museum in Fredericksburg, TX. The ship sustained hits from three kamikazes and two bombs killing 30 and wounding 121 more.

The massive air attack from 156 kamikaze and conventional aircraft was aimed at the invasion fleet off of Okinawa. The Hadley, The Evans, marine fighter pilots and other picket ships shot down over 70% of the Japanese planes before they ever reached Okinawa. Many aircraft carriers, battleships and troop transports were saved by this heroic defense on the radar picket line 50 miles to the north of the landing beach. The Hadley received the Presidential Unit Citation for the action. 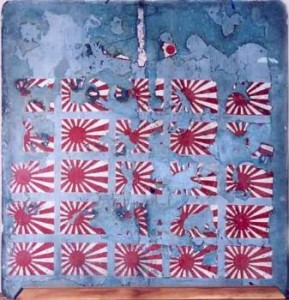 Scoreboard from the bridge of the Hadley