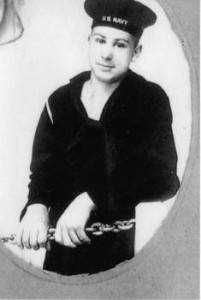 Hadley shipmate, Dell Burt Hall is mending after his fall on the ice this winter. He is getting around with a walker and still able to drive to his favorite restaurant for a biscuit and gravy breakfast. The big news from Dell is that he is finally going to receive his Purple Heart for combat injuries 11 May 1945 on the Hadley.

Dell had been passing ammo up to a 5-inch gun when the 500 pound bomb exploded under the ship. The blast lifted the ship out of the water and Dell’s left leg was gashed when he fell. He was one of the many walking wounded that day. There were 121 crewmembers who received a Purple Heart. Dell never got his. A friend at the VA Hospital in Aberdeen SD took up his plight. Now 70 years later Dell will receive his Purple Heart. A special ceremony is planned at the American Legion Post in Aberdeen.

My wife and I visited Dell in September 2014. We went to his favorite restaurant. The waitress just looked at Dell and said, “one biscuit and gravy, right Dell?” He beamed and said, “yep.” Everyone knows him there.  Photo: Dell and Jeff Veesenmeyer at the Millstone Restaurant in Aberdeen.