Hadley shipmate Leo J. Polek GM3/c passed away in 2016. He was 93. He is survived by his wife, Tina who is living in Massapequa Park, NY. Leo served in the Navy and Coast Guard from 1942 to 1962 and retired as a Chief Petty Officer. 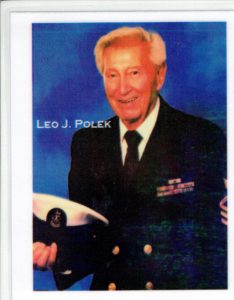 In an interview for the book Kamikaze Destroyer, Leo gave the following narrative.

Leo Polek: I was on the gun crew of the number one five-inch mount. We were firing so fast that the empty powder cases ejecting fron the back of the mount piled up against the superstructure. Shell cases were preventing the mount to train (turn). Several of us jumped out of the mount to clear the cases. But they were too hot to handle. The hot case guys with asbestos gloves tossed them overboard and we helped by kicking them over the side. 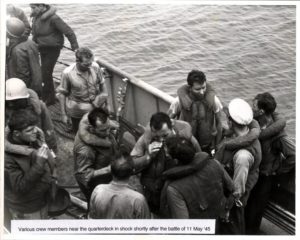 Polek is in upper left sleeves rolled up, with a tired and dazed crew after the battle. 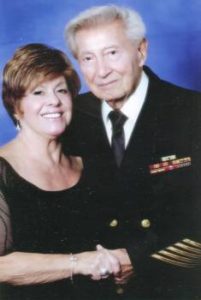