The Story of USS Maryland BB46 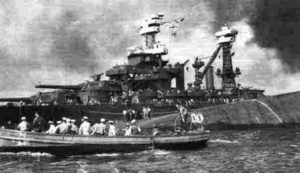 USS Maryland getting underway a Pearl after the attack. See upturned hull in foreground, this USS Oklahoma. Maryland was the only battleship that was able to get up steam after the attack but was not sea worthy until hull damage was repaired.

displacement. 32,600
length. 624′
beam. 97’6″
draft. 30’6″
speed. 21.17 k.
complement. 1,080
armament. 8 16″, 12 5″, 4 3″, 4 6-pdr., 2 21″ tt.
class Colorado
Maryland (BB-46) was laid down 24 April 1917 by Newport News Shipbuilding Co., Newport News, Va.; launched 20 March 1920; sponsored by Mrs. E. Brook Lee, wife of the Comptroller of the State of Maryland; and commissioned 21 July 1921, Cap t. C. F. Preston In command.
With a new type seaplane catapult and the Brat 16-Inch guns mounted on a U.S. ship, Maryland was the pride of the Navy. Following an east coast shakedown she found herself in great demand for special occasions. She appeared at Annapolis for the 1922 Naval Academy graduation and at Boston for the anniversary of Bunker Hill and the Fourth of July. Between 18 August and 25 September she paid her first visit to a foreign port transporting Secretary of State Charles Evans Hughes to Rio de Janeiro for Brazil’s Centennial Exposition. The next year, after fleet exercises off the Panama Canal Zone. Maryland transited the canal In the latter part of June to join the battle fleet stationed on the west coast.

She made a goodwill voyage to Australia and New Zealand In 1925, and transported President-elect Herbert Hoover on the Pacific leg of his tour of Latin America In 1928. Throughout these years and the 1930’s she served as a mainstay of fleet readiness through tireless training operations. In 1940 Maryland and the other battleships of the battle force changed their bases of operations to Pearl Harbor. She was present at battleship row along Ford Island when Japan struck 7 December 1941.

A gunner’s mate striker, writing a letter near his machine-gun, brought the first of his ship’s guns into play, shooting down one of two attacking torpedo planes. Inboard of Oklahoma and thus protected from the initial torpedo attack, Maryland managed to bring all her antiaircraft batteries into action. Despite two bomb hits she continued to fire and, after the attack, sent firefighting parties to assist her sister ships. The Japanese announced that she had been sunk, but 30 December , battered yet sturdy, the entered the repair yard at Puget Sound Navy Yard.

She emerged 26 February 1942 not only repaired but modernized and ready for great service. During the important Battle of Midway, the old battleships, not fast enough to accompany the carriers, operated as a backup force. Thereafter Maryland engaged in almost constant training exercises until 1 August, when she returned to Pearl Harbor.

Assigned sentinel duty along the southern supply routes to Australia and the Pacific fighting fronts, Maryland and Colorado operated out of the Fiji Islands in November and advanced to the New Hebrides in February 1943. Her return to Pearl Harbor after 10 months in the heat of the South Pacific brought the installation of additional 40mm. antiaircraft protection.

In the vast amphibious campaigns of the Pacific the firepower of Maryland and her sister ships played a key role. Departing the Hawaiian Islands 20 October for the South Pacific, Maryland became flagship for Rear Adm. Harry W. Hill’s Southern Attack Force in the Gilberts Invasion, with Maj. Gen. Julian C. Smith, Commander, 2d Marine Division, embarked. Early on 20 November her big guns commenced 5 days of shore bombardment and call fire assignment in support of one of the most gallant amphibious assaults in history, at Tarawa. After the island’s capture, she remained in the area protecting the transports until she headed back to the United States 7 December.

Maryland steamed from San Pedro 13 January 1944, rendezvoused with TF 53 at Hawaii, and sailed in time to be in position off the well-fortified Kwajalein Atoll in the Marshalls on the morning of the 31st. Assigned to reduce pillboxes and block houses on Roi Island, the old battleship fired splendidly all day and again the following morning until the assault waves were within 500 yards of the beach. Following the operation she steamed back to Bremerton, Wash., for new guns and an overhaul.

Two months later Maryland, again readied for battle, sailed westward 5 May to participate in the biggest campaign yet attempted in the Pacific war – Saipan. Vice Adm. R. K. Turner allotted TF 52.3 days to soften up the island before the assault. Firing commenced 0545 on 14 June. Silencing two coastal guns, Maryland encountered little opposition as she delivered one devastating barrage after another. The Japanese attempted to strike back through the air. On the 18th the ship’s guns claimed their first victim but 4 days later a Betty sneaked in flying low over the still-contested Saipan hills and found two anchored battleships. Crossing the bow of Pennsylvania, she dropped a torpedo which opened a gaping hole in Maryland’s bow, portside. Casualties were light and in 15 minutes she was underway for Eniwetok, and shortly thereafter to the repair yards at Pearl Harbor.

With an around-the-clock effort by the shipyard workers, on 19 August, 34 days after arrival, the ship again steamed forth for the war zone. Rehearsing briefly in the Solomons, she joined Rear Adm. J. B. Oldendorf’s Western Fire Support Group (TG 32.5) bound for the Palau Islands. Firing first on 12 September to cover minesweeping operations and underwater demolition teams, she continued the shore bombardment until the landing craft approached the beaches on the 15th. Four days later organized resistance collapsed, permitting the fire support ships to retire to the Admiralty Islands.

Reassigned to the 7th Fleet, Maryland sortied 12 October to cover the important initial landings in the Philippines at Leyte. Despite floating mines, the invasion force entered Leyte Gulf on the 18th. The bombardment the following day and the landings of the 20th went well, but the Japanese decided to contest this success with both kamikazes and a three-pronged naval attack.

Forewarned by submarines and scout planes, the American battleship-cruiser force steamed 24 October to the southern end of Leyte Gulf to protect Surigao Strait. Early on the 25th the enemy battleships Fuso and Yamashiro led the Japanese advance into the Strait. The waiting Americans pounded the enemy ships severely. First came torpedoes from the fleeting PT boats, then more torpedoes from the daring destroyers. Next came gunfire from the cruisers. Finally, at 0355 the readied guns of the battleship line opened fire. Thunderous salvos of heavy caliber fire slowed the enemy force and set the Japanese battleships on fire. Leaving their doomed battleships behind, the decimated enemy ships fled; only a remnant of the original force escaped subsequent naval air attacks. Similarly other U.S. forces blunted and repulsed attacks by the center and northern enemy forces during the decisive Battle for Leyte Gulf.

In the aftermath of this important victory, Maryland patrolled the southern approaches to Surigao Strait until 29 October; after replenishment at Manus, Admiralties, she resumed patrol duty 16 November. Japanese air attacks continued to pose a definite threat. During a raid on 17 November, guns of TG 77.2 splashed 11 of the attacking planes. Shortly after sunset 2 days later, a determined suicide plane dove through the clouds and crashed Maryland between turrets Nos. 1 and 2. Thirty- one sailors died in the explosion and fire that followed; however, the sturdy battleship continued her patrols until relieved 2 December. She reached Pearl Harbor 18 December and during the next 2 months workmen repaired and refitted “Fighting Mary.”

After refresher training, Maryland headed for the western Pacific 4 March 1945, arriving Ulithi the 16th. There she joined Rear Adm. M. L. Deyo’s TF 54 and on 21 March departed for the invasion of Okinawa. She closed the coast of Okinawa 25 March and began pounding assigned targets along the southwestern part of the Japanese island fortress. In addition, she provided fire support during a diversionary raid on the southeast coast drawing enemy defenses from the main amphibious landings on the western beaches. On 3 April she received a fire support call from Minneapolis (CA-36). The cruiser was unable to silence entrenched shore batteries with 8-inch fire and called on “Fighting Mary’s” mighty 16-inch guns for aid. The veteran battleship hurled six salvos which destroyed the enemy artillery.

Maryland continued fire support duty until 7 April when She sailed with TF 54 to intercept a Japanese surface force to the northward. These ships, including mighty battleship Yamato, came under intense air attacks that same day, and planes of th e Fast Carrier Task Force sank six of 10 ships In the force. At dusk on the 7th Maryland took her third hit from enemy planes in 10 months. A suicide plane loaded with a 500-pound bomb crashed the top of turret No. 3 from starboard. The explosion wiped out the 20mm. mounts, causing 53 casualties. As before, however, she continued to blast enemy shore positions with devastating 16- inch fire. While guarding the western transport area 11 April, she splashed two planes during afternoon raids.

On 14 April Maryland left the firing line as escort for retiring transports. Steaming via the Marianas and Pearl Harbor, she reached Puget Sound 7 May and entered the Navy Yard at Bremerton the next day for extensive overhaul. Completing repair s in August, she now entered the “Magic Carpet” fleet. During the next 4 months she made five voyages between the west coast and Pearl Harbor, returning more than 8,000 combat veterans to the United States.

Arriving Seattle, Wash., 17 December, she completed “Magic Carpet” duty. She entered Puget sound Naval Shipyard 15 April 1946 and was placed in commission in reserve on an inactive basis 16 July. She decommissioned at Bremerton 3 April 1947 and remained there as a unit of the Pacific Reserve Fleet. Maryland was sold for scrapping to Learner Co. of Oakland, Calif., 8 July 1959.

On 2 June 1961 the Honorable J. Millard Tawes, Governor of Maryland, dedicated a lasting monument to the memory of the venerable battleship and her fighting men. Built of granite and bronze and incorporating the bell of “Fighting Mary,” this monument honors a ship and her men whose service to the Nation reflected the highest traditions of the naval service. This monument is located on the grounds of the State House, Annapolis, Md.