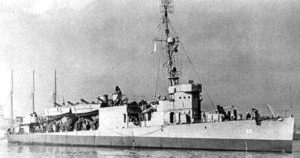 USS Roper DD147, was recommissioned APD20, 20 October 1943. CDR Hadley
commanded this ship in the late 1930’s when it was still DD147. It then looked pretty
much like the Hart, shown above. The USS Little looked pretty much like this ship
after it became a APD.

Following shakedown off the New England coast, Roper sailed east in mid June 1919 and, after stops at Ponta Delgada, Gibraltar, and Malta, anchored in the Bosporus on 5 July. For the next month she supported Peace Commission and Relief Committee work in the Black Sea area, carrying mail and passengers to and from Constantinople, Novorossisk Batum, Samsun, and Trebizond. On 20 August the destroyer returned to the United States, at New York, only to sail again 6 days later. At the end of the month she transited the Panama Canal and moved north to San Diego.

Roper remained on the west coast until July 1921. On the 23d, she departed San Francisco for duty on the Asiatic Station. Arriving at Cavite on 24 August, she remained in the Philippines into December. She then moved into Chinese waters and, into the summer, operated primarily from Hong Kong and Chefoo. On 25 August 1922, she headed back to California. Routed via Nagasaki, Midway, and Pearl Harbor she arrived at San Francisco on 13 October. Two days later she shifted to San Pedro, thence, proceeded to San Diego where she was decommissioned on 14 December 1922 and berthed with the Pacific Reserve Fleet.

Recommissioned On 18 March 1930, Roper resumed operations in the Pacific. Operating primarily in the southern California area, in active and rotating reserve squadrons, for the next 7 years, she deployed to Panama, to Hawaii and to the Caribbean for fleet problems and maneuvers fin 1931 1933, 1935, and 1936. During January and February of the latter year, she also moved north for operations in Alaskan waters.

In February 1937, Roper departed California and, after transiting the Panama Canal, joined the Atlantic Fleet. For the remainder of the year, through 1938 and into 1939, she conducted exercises primarily off the mid-Atlantic seaboard and, during part of each Year, in the Caribbean. In November 1939, after the outbreak of World War II in Europe, she shifted from Norfolk to Key West, whence she patrolled the Yucatan Channel and the Florida Straits. In December she returned to Norfolk. In January 1940, she moved south again, to Charleston and in March she headed north for duty on the New England Patrol.

Through the prewar “Neutrality Patrol” period, Roper continued to range the waters off the east and gulf coasts. Off Cape Cod on 7 December 1941, she returned to Norfolk for an abbreviated availability at midmonth, then steamed to Argentina. In early February 1942, she completed a convoy escort run to Londonderry, then, in March, returned to the Norfolk area for patrol and escort duty. A month later, on the night of 13-14 April, she made contact with a surfaced German U-boat off the coast of North Carolina. The ensuing chase ended with the sinking of U-86, a unit of the 7th U-boat Flotilla.

At the end of May, Roper began a series of coastwise escort runs, from Key West to New York, which took her into 1943. In February of that year, she shifted to Caribbean-Mediterranean convoy work and remained on that duty until October when she entered the Charleston Navy Yard for conversion to a high speed transport.

Reclassified APD-20 on 20 October 1943, Roper departed Charleston in late November and trained in the Chesapeake Bay area and off the Florida coast into the new year, 1944 On 13 April she steamed east and at the end of the month joined the 8th Fleet at Oran, Algeria. A unit of Transport Division 13, assigned to support the offensive in Italy, Roper landed units of the French Army on Pianosa on 17 June and into July, plied between Oran and Naples and operated along the western coast of the embattled peninsula. In August she shifted her attention to southern France. On the 15th she arrived off that coast as part of the “Sitka” Force and landed troops on Levant Island. On 5 September she returned to Italy; resumed runs between Naples and Oran, and, in early December departed the latter port for Hampton Roads.

Arriving at Norfolk on the 21st, Roper sailed again on 29 January 1945. On transiting the Panama Canal, she reported to the Pacific Fleet, and after stops in California and Hawaii, moved into the Marianas. On 11 May she departed Guam for the Ryukyus. Arriving in Nakagusuku Wan on the 22d, she circled to the Hagushi anchorage the same day. Three days later, while on screening station off that transport area she was hit by a kamikaze.

Ordered back to the United States to complete repairs, she departed the Ryukyus on 6 June and reached San Pedro a month later. In August she shifted to Mare Island, but with the cessation of hostilities repair work was halted. Decommissioned on 15 September 1945, Roper’s name was struck from the Navy list on 11 October 1945 and her hulk was sold to the Lerner Co., Oakland, Calif. Removed in June 1946, it was scrapped the following December